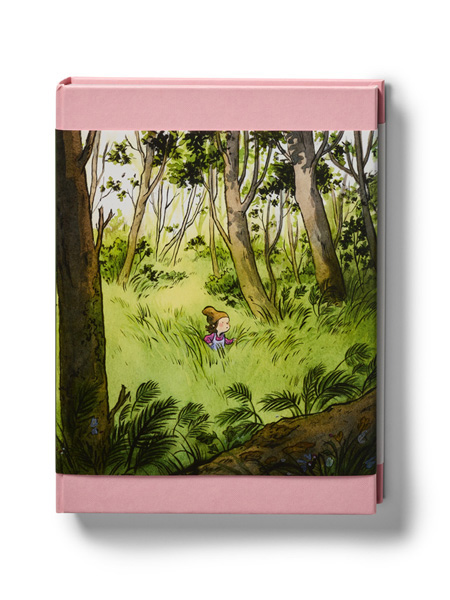 By Nadine Robert and Qin Leng

“A unique book that addresses a serious and philosophical topic with sensitivity and purity. The author and the illustrator have brilliantly succeeded in drawing us into their rich world. The reader follows the main character in her quest and, with her, takes time to reflect and welcome silence. It is a unifying message for young and old alike.”

Trèfle and her family live on a farm. There is always lots to do around the goat shed, like pick blueberries or mushrooms. Trèfle wants to do all these things, but choosing just one is really hard. One day, when a little goat named Pivoine wanders off the farm, Trèfle realizes that, to save Pivoine, she will have to act quickly and not hesitate.

Nadine Robert is an author, an editor and a translator. She started out as a video game designer, then made the switch to screenwriting for animated films. She holds a master’s degree in education and a bachelor’s degree in literature. Her first book, Joseph Fipps, was praised by Publishers Weekly magazine. The co-founder of publishing houses Comme des géants and Le Lièvre de Mars, she holds a lifelong passion for illustrated books. Nadine Robert lives on the South Shore of Montréal, Quebec, with her family.

Qin Leng is a concept animation artist, an illustrator and an author. With a degree from the Mel Hoppenheim School of Cinema at Cordordia University, she has created animated short films and illustrations for various picture books, magazines and book covers. She illustrated Hana Hashimoto, Sixth Violin, written by Chieri Uegaki, which was a 2014 Governor General’s Literary Awards finalist and won the Asian/Pacific American Librarians Association Award for best picture book. Her many picture books have also earned her nominations for several awards, including the USBBY Outstanding International Book, the Marilyn Baillie Picture Book Award and the TD Canadian Children’s Literature Award. Born in Shanghai, China, Qin Leng now lives in Toronto, Ontario, with her husband and son.