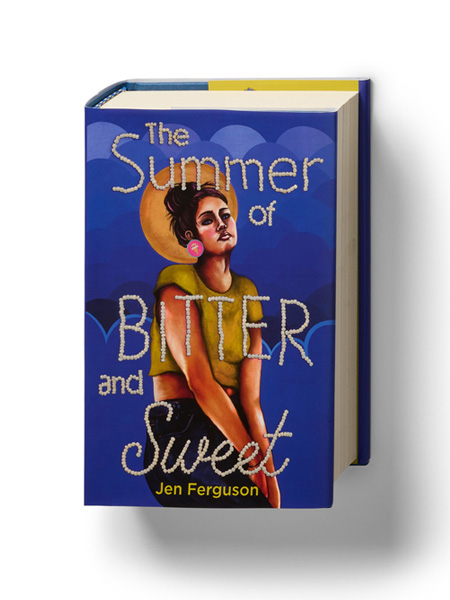 The Summer of Bitter and Sweet

“A timely novel that flows from the author’s Métis and Canadian roots, The Summer of Bitter and Sweet features vibrant prose, real family conflict and a raw and evocative commentary on the struggles of being different in a small-town, prairie setting. Touching on subjects that speak to today’s challenges for 2SLGBTQI+ youth, the complex story delivers an emotional impact. The recipe notes about ice cream add a scoop of sweetness to level out Lou’s sometimes bitter realities.”

In this complex and emotionally resonant novel about a Métis girl living on the Canadian prairies, Jen Ferguson serves up a powerful story about rage, secrets, and all the spectrums that make up a person—and the sweetness that can still live alongside the bitterest truth.

Lou has enough confusion in front of her this summer. She’ll be working in her family’s ice-cream shack with her newly ex-boyfriend—whose kisses never made her feel desire, only discomfort—and her former best friend, King, who is back in their Canadian prairie town after disappearing three years ago without a word.

But when she gets a letter from her biological father—a man she hoped would stay behind bars for the rest of his life—Lou immediately knows that she cannot meet him, no matter how much he insists.

While King’s friendship makes Lou feel safer and warmer than she would have thought possible, when her family’s business comes under threat, she soon realizes that she can’t ignore her father forever.

Jen Ferguson (she/her) is a writer of fiction, essays and poems, an editor and a teacher. She is Michif/Métis and white, an activist, an intersectional feminist, an auntie, and an accomplice armed with a PhD in English and creative writing. Her first book for adults, Border Markers, was published by NeWest Press in 2016. Her novella, “Missing,” won The Malahat Review’s 2022 Novella Prize and her essay, “Off Balance,” was selected for the Best Canadian Essays 2020. Jen Ferguson lives and works in Cedar Rapids, USA.