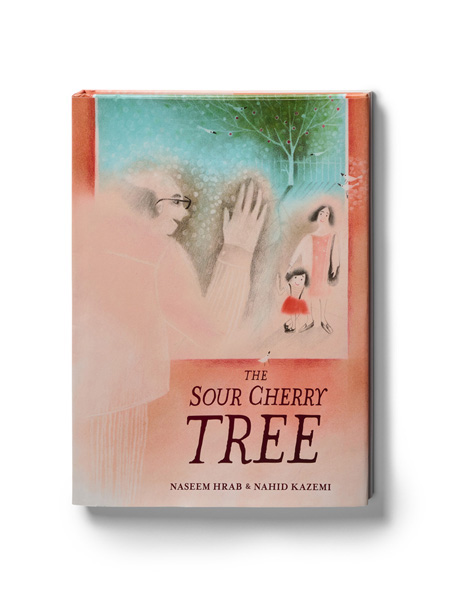 By Naseem Hrab and Nahid Kazemi

“A moving reflection of love and loss through the eyes of a child, The Sour Cherry Tree is a tender story about family and culture that is portrayed with subtlety and thoughtfulness. Memories of childhood and bereavement feel tangible and are softened by Kazemi’s gentle artistry. Hrab and Kazemi’s work evokes the depth of love we share through little gestures. This beautifully crafted book will linger long after you have finished reading.”

A heartwarming look at love, loss, and memorable objects through the eyes of a child by critically-acclaimed creators Naseem Hrab and Nahid Kazemi.

After her grandfather’s death, a young girl wanders through his house. As she tours each room, the objects she discovers stir up memories of her grandfather—her baba bozorg. His closet full of clothes reminds her of the mints he kept in his pockets. His favorite teacup conjures up thoughts of the fig cookies he would offer her. The curtains in the living room bring up memories of hide-and-seek games and the special relationship that she and her baba bozorg shared, even though they spoke different languages.

The Sour Cherry Tree is an authentic look at death and loss centred on the experiences of a child, both strikingly whimsical and matter-of-fact. Drawing on the Iranian-Canadian author’s childhood memories, this tender meditation on grief, love, and memory is at once culturally specific and universally relatable.

Naseem Hrab is a writer, storyteller and lover of improv. She is the author of the Ira Crumb series, How to Party Like a Snail and Weekend Dad, a former Governor General’s Literary Awards finalist. Her work has been praised by Quill & Quire, The Globe and Mail, the Wall Street Journal, and NPR, among others. She once worked as a librarian and now works in children’s publishing. Naseem Hrab lives in Toronto, Ontario.

Nahid Kazemi is an author, an illustrator and a multidisciplinary artist who has published more than 65 children’s books. She was a Governor General’s Literary Awards finalist and has been nominated for the Astrid Lindgren Memorial Award. Recent publications include Shahrzad & the Angry King, Just Bea, Over the Rooftops, Under the Moon and The Old Woman. She was IBBY Canada’s Joanne Fitzgerald Illustrator in Residence for 2018 and TD Summer Reading Club illustrator for 2022. Nahid Kazemi lives in Montréal, Quebec.