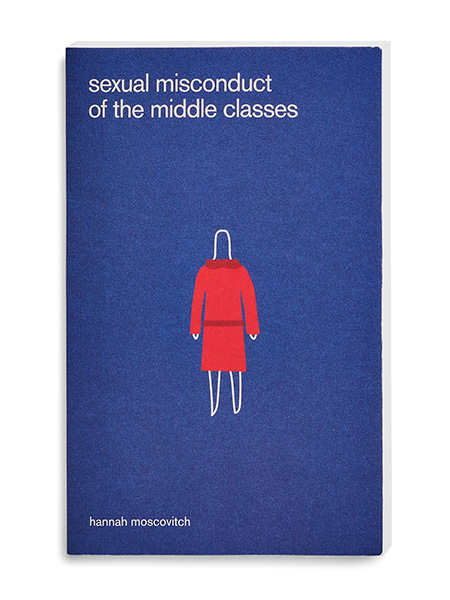 Sexual Misconduct of the Middle Classes

“Hannah Moscovitch’s play is an articulate, poetic, beautifully written play with characters who are complex and complicated. A superb piece of writing that shines as a play, as a living piece of theatre, and no doubt, literature that will endure. The committee could not be more thrilled to have chosen this winning play.”

The archetypal student-teacher romance is cleverly turned on its head for the post-#MeToo era in this striking new play by the acclaimed author of What a Young Wife Ought to Know and Bunny.

Jon, a star professor and author, is racked with self-loathing after his third marriage crumbles around him when he finds himself admiring a student—a girl in a red coat. The girl, 19-year-old Annie, is a big fan of his work and also happens to live down the street. From their doorways to his office to hotel rooms, their mutual admiration and sexual tension escalates under Jon’s control to a surprising conclusion that will leave you wanting to go back and question your perceptions of power as soon as you finish.

Hannah Moscovitch is an acclaimed playwright, TV writer and librettist whose work has been widely produced in Canada and around the world. Recent stage work includes Sexual Misconduct of the Middle Classes, Old Stock: A Refugee Love Story (co-created with Christian Barry and Ben Caplan) and Secret Life of a Mother (with Maev Beaty and Ann-Marie Kerr). Moscovitch has received numerous awards, including the Trillium Book Award, the Nova Scotia Masterworks Arts Award, the Scotsman Fringe First and the Herald Angel Awards at the Edinburgh Festival Fringe, and the prestigious Windham-Campbell Prize administered by Yale University. She has been nominated for the Susan Smith Blackburn Prize, the Drama Desk Award and Canada’s Siminovitch Prize in Theatre, as well as a Governor General’s Literary Award twice previously. Hannah Moscovitch is a playwright-in-residence at Tarragon Theatre in Toronto, and she lives in Halifax, Nova Scotia.