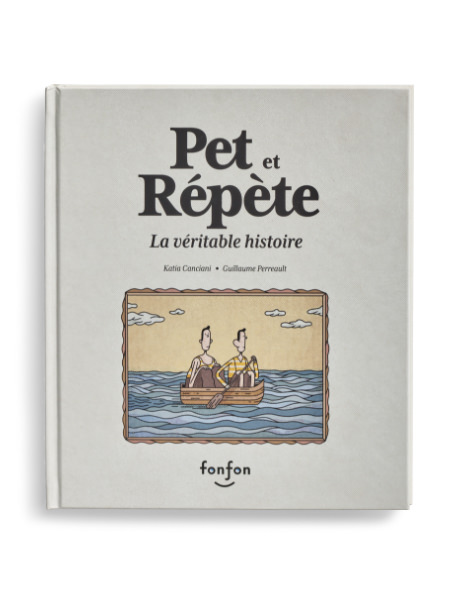 By Katia Canciani and Guillaume Perreault

“A homegrown book that is both universal and inclusive, funny, whimsical, and playful. The vintage-style, halftone illustrations and photography references add a bunch of fun details and bring a second and even a third layer to the text. A worn-out joke is finally told and revealed in a surprising and original way.”

You know the story about Pete and Repeat, right? Of course you do! You’ve heard it a thousand times.

“Pete and Repeat were on a boat. Pete fell off. Who was left? Repeat…”

What you may not know is that, over time, the story has changed quite a bit. In order to honour these two famous characters once and for all, let us make room for the true story of Pete and Repeat.

Author Katia Canciani has published 48 books for adult and young readers. Sensitivity, humanist values, and humour are staples of her writing. She holds a bachelor’s degree in communications and a professional pilot’s licence. She loves to cultivate a passion for words, self-esteem, and perseverance in children. Originally from Quebec, Katia Canciani lived in Manitoba, Ontario, and Nova Scotia before settling in her native province, in Gatineau, Quebec, specifically.

Illustrator Guillaume Perreault primarily works in literature for young readers, having illustrated several picture books and novels. With three books under his belt as a writer, he enjoys exploring the world of writing and comic books. In 2016, he received the “Petit, choix des lecteurs” from the Salon du livre de la presse jeunesse Seine-Saint-Denis for his book, Le facteur de l’espace. Born in Rimouski, Quebec, Guillaume Perreault now lives in Trois-Rivières, Quebec.