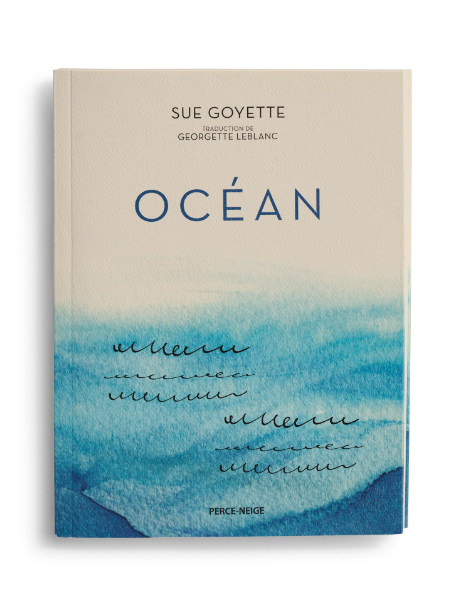 “The poems in this collection resonate with the waves that crash against the Acadian coast at Baie Sainte-Marie. Georgette LeBlanc heard the call of Sue Goyette’s verses and dove in like a siren in the ocean. Upon reading this luminous epic translated into poetically precise wording, each and every person will hear the foghorn in the distance and will taste the brine on the breeze.”

With this book, Sue Goyette offers nothing less than a biography of the Ocean. The Halifax-based poet reinvents the world of the North Atlantic through powerful imagery and metaphors, new myths, and urban legends highlighted by poet Georgette LeBlanc’s absolutely unique translation.

Georgette LeBlanc established herself as one of Acadian poetry’s leading figures with her collections that read like novels: Alma, Amédé and Le Grand feu (Éditions Perce-Neige), all of which have received several prizes. Her third book, Prudent, was a Governor General’s Literary Awards finalist. Her poem Ici was a finalist for the Prix de la poésie de Radio-Canada in 2015. In addition, she has written for the Belle Baie television series. With Océan by Sue Goyette, she boldly presents her very first translation in her distinct language, which is based in Acadian French. Originally from Pointe-de-l’Église, Nova Scotia, Georgette LeBlanc now lives in Moncton, New Brunswick.