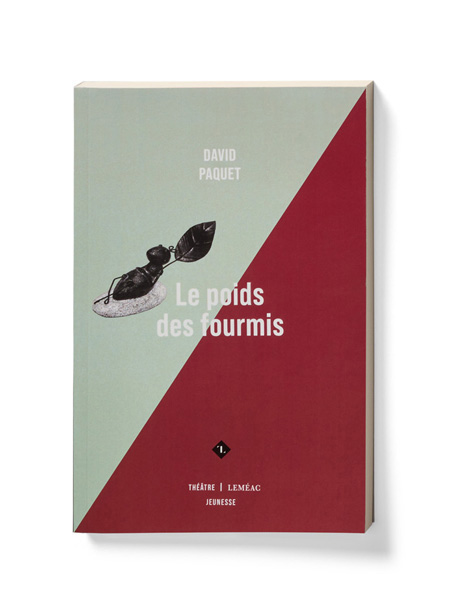 “Le poids des fourmis is a wildly imaginative, insightful and uncompromising work for teenagers—and those who have remained teenagers. The author’s infectious love of writing comes through in the way he names the world’s problems in a whirlwind of irony, humour, and hard and unforgiving truths—but not without tenderness. The playful text both deconstructs and echoes the current social and political system.”

Jeanne is fierce and Olivier is shy. Distraught by the state of the world, they are drawn into a school election that both pits them against each other and mobilizes them. Some 30 shimmering characters cross their paths like so many flashes of light, punctuating their frantic quest to fight the ambient inertia and to effect change.

Funny, rough, zany, caustic and poetic, this play, which is firmly rooted in its era, infuses satire and an admitted tenderness in public commentary with magic. Carefully chiselled, with a clarity that colours everything, this story is a delinquent fresco where adolescence, at the heart of a disaster, dares to take a stand and keep dreaming in spite of everything around it.

David Paquet is an author, a performer and a trainer. A graduate of the National Theatre School of Canada, he published Porc-épic in 2009, which won a Governor General’s Literary Award in the Drama category and the Michel-Tremblay Award in 2010. He has also written several plays: 2 h 14, Appels entrants illimités, Le brasier, Papiers mâchés, Les grands-mères mortes (co-authored), Histoires à plumes et à poils (co-authored), Le voilier (manifeste du fragile), Le soulier, Chansons pour le musée (co-authored) and Le poids des fourmis. Translated into several languages and awarded many prizes in Canada and abroad, his works have been performed in more than a dozen countries in Europe and North America. David Paquet lives in Montréal, Quebec.