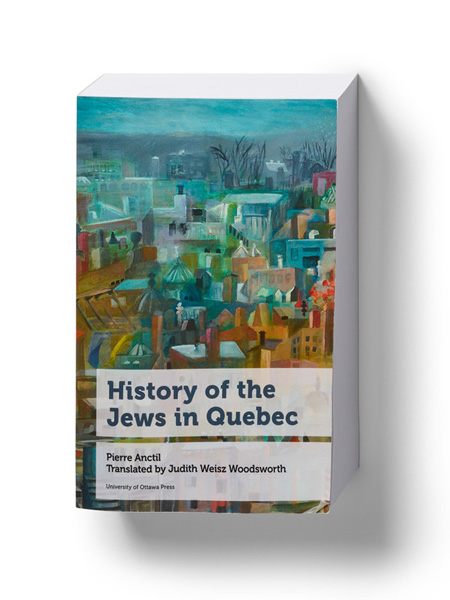 History of the Jews in Quebec

“Judith Weisz Woodsworth’s flawless translation renders Pierre Anctil’s formidable socio-historical work accessible to an English-speaking audience. It replicates the engaging style of the original with enthusiasm and rigour. Weisz Woodsworth fully captures the scholarly but compelling prose of this essential overview. Her translation of the extensive documentation is equally masterful.”

The presence of Jews in Quebec dates back four centuries. Quebec Jewry, in Montréal in particular, has evolved over time, thanks to successive waves of migration from different regions of the world. The Jews of Quebec belong to a unique society in North America, which they have worked to fashion. The dedication with which they have defended their rights and their extensive achievements in multiple sectors of activity have helped foster diversity in Quebec.

This work recounts the different contributions Jews have made over the years, along with the cultural context that encouraged the emergence in Montréal of a Jewish community like no other in North America. This is the first overview of a history that began during the French Regime and continued, through many twists and turns, up to the turn of the 21st century.

Judith Weisz Woodsworth is a translator and former university professor. She has published widely on translation history and theory, including Translators through History, with Jean Delisle. Her recent publications include the monograph Telling the Story of Translation: Writers Who Translate (2017), the edited volumes The Fictions of Translation (2018) and Translation and the Global City: Bridges and Gateways (2021), and Hutchison Street (2018), a translation of Abla Farhoud’s novel, Le sourire de la petite juive. She was founding president of the Canadian Association for Translation Studies and has served as a senior administrator at universities in Halifax, Sudbury and Montréal. Judith Weisz Woodsworth lives in Montréal, Quebec.