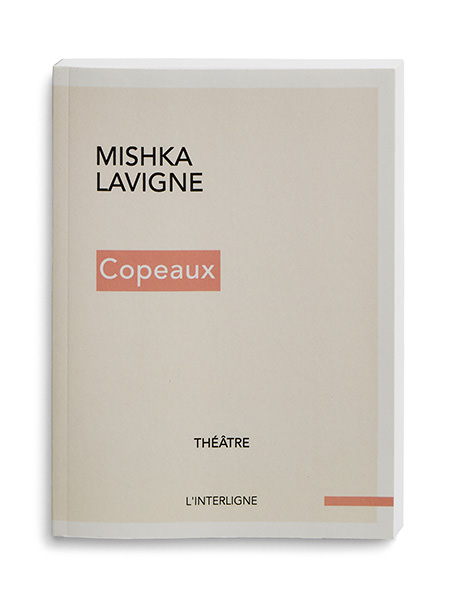 “This autopsy of a break-up viewed through the poetic prism of nature reasserting itself is both light and moving. We grow deeply attached to these two beings who are separating with dignity. Nature acts as a mirror for emotions; it inhabits the secret spaces of dreams, where freedom comes to life, is desired and frightens, all at once. The writing is literary lace filled with vertigo, a fragile equilibrium on the tip of one’s toes.”

In this theatre work, the author explores a crumbling relationship and the relationship’s remains: the end, without fanfare but not without heartbreak. Timeless and poetic, the writing, which is inspired from the visual world created by Canadian artist Stefan Thompson, floats along between dream, reality and regret.

Mishka Lavigne is a playwright and literary translator. Her play, Havre, won a Governor General’s Literary Award (Drama – French, 2019). Her newest work, Copeaux, a poetic movement theatre creation developed with director Éric Perron, was produced in Ottawa in March 2020. It won the Prix littéraire Jacques-Poirier in February 2021 and a Governor General’s Literary Award in November 2021, and it was a finalist for the Prix Marcel-Dubé. Albumen, Lavigne’s first English-language work, won the Prix Rideau Award for best new creation in 2019 and the Quebec Writers’ Federation Playwriting Prize in 2020. Her works have been produced and developed in Canada, Europe, Australia, Haiti and the United States. She is currently working on a bilingual chamber opera libretto with Montréal composer Tim Brady, and her work, Shorelines, will soon be published by Playwrights Canada Press. Mishka Lavigne lives in the Ottawa/Gatineau area.