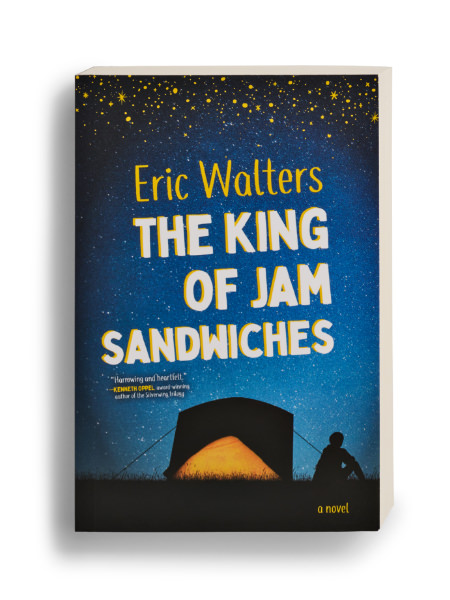 The King of Jam Sandwiches

“The King of Jam Sandwiches pulls us into the unforgettable friendship of hard-working Robbie and tough-as-nails Harmony in an exceptionally honest survival story that is also compulsively readable and emotionally gripping. Walters has written a heart-wrenching novel about what it is like to grow up amidst poverty and mental illness, one that speaks to contemporary young readers and offers them hope.”

Thirteen-year-old Robbie leads a double life. It’s just Robbie and his dad, but no one knows that his dad isn’t like most parents. Sometimes he wakes Robbie up in the middle of the night to talk about dying. Sometimes he just leaves without telling Robbie where he’s going. Once, when Robbie was younger, he was gone for more than a week. Robbie was terrified of being left alone, but even more scared of telling anyone, in case he was put into foster care. No one can know. Until one day, when Robbie has to show the tough new girl, Harmony, around school. Their first meeting ends horribly, and she punches Robbie in the face. But eventually they come to realize that they have a lot more in common than they thought. Can Robbie’s new friend be trusted to keep his secret?

Eric Walters is a Member of the Order of Canada and the author of over 115 books that have collectively won more than 100 awards, many of which have been translated into one or more of 16 different languages. A former teacher, he began writing as a way to get his fifth-grade students interested in reading and writing. Walters is a tireless presenter, speaking to over 100,000 students each year in schools across the country. He has won the Ontario Library Association’s Silver Birch Fiction Award three times and the Association’s Red Maple Award four times, a Christopher Award and an Africana Book Award. In addition, he cofounded Creation of Hope, a children’s program that provides services to orphans in rural Kenya. Born in Toronto, Ontario, Eric Walters now lives in Guelph, Ontario, with his wife, Anita.