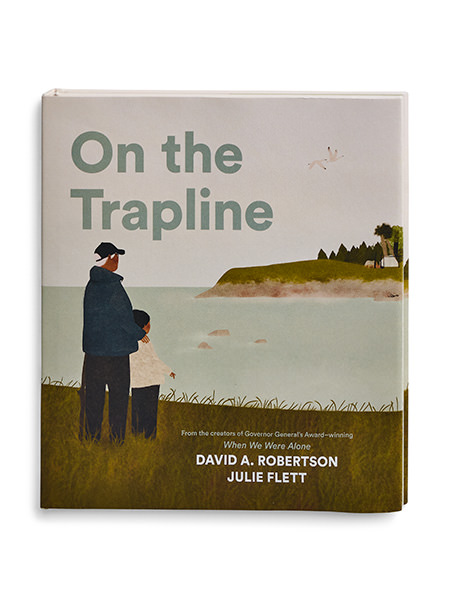 by David A. Robertson and Julie Flett

“With its muted palette and gentle text, On the Trapline is quietly profound. Robertson’s reflective storytelling coupled with Flett’s masterpiece illustrations make this picture book a must-read about the connection to language, family, the land and tradition.”

A picture book celebrating Indigenous culture and traditions. The Governor General Award-winning team behind When We Were Alone shares a story that honours our connections to our past and our grandfathers and fathers.

A boy and Moshom, his grandpa, take a trip together to visit a place of great meaning to Moshom. A trapline is where people hunt and live off the land, and it was where Moshom grew up. As they embark on their northern journey, the child repeatedly asks his grandfather, “Is this your trapline?” Along the way, the boy finds himself imagining what life was like two generations ago—a life that appears to be both different from and similar to his life now. This is a heartfelt story about memory, imagination and intergenerational connection that perfectly captures the experience of a young child’s wonder as he is introduced to places and stories that hold meaning for his family.

David A. Robertson is the author of numerous books for young readers, including When We Were Alone (illustrated by Julie Flett), which won a Governor General’s Literary Award in 2017 and was nominated for the TD Canadian Children’s Literature Award. He is also the author of The Barren Grounds and The Great Bear, two books in a middle-grade fantasy series called The Misewa Saga. The Barren Grounds was a Kirkus and Quill & Quire best middle-grade book of 2020, as well as a USBBY and Texas Lone Star selection, and was shortlisted for the Silver Birch Fiction Award, the TD Canadian Children’s Literature Award and the 2020 Governor General’s Literary Award for Young People’s Literature – Text. A sought-after speaker and educator, David A. Robertson is a member of the Norway House Cree Nation and currently lives in Winnipeg, Manitoba.

Julie Flett is a Swampy Cree and Red River Métis author, illustrator and artist. She has received many awards for her picture books, including the Governor General’s Award for When We Were Alone (written by David A. Robertson), the American Indian Library Association Award for Best Picture Book for Little You (written by Richard Van Camp), and a BolognaRagazzi special mention for We Sang You Home (also written by Richard Van Camp). She is the three-time recipient of the Christie Harris Illustrated Children’s Literature Award. Her picture book, Birdsong, is a Boston Globe-Horn Honor Book and 2020 TD Canadian Children’s Literature Award winner, and Wild Berries was chosen as Canada’s First Nation Communities Read title selection for 2014-2015. Julie Flett lives in Vancouver, British Columbia, Sḵwx̱wú7mesh, xʷməθkʷəy̓əm, səlil̓ilw̓ətaʔɬ lands.