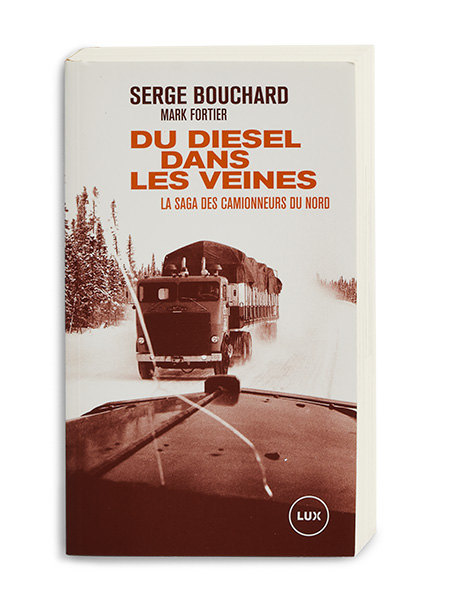 by Serge Bouchard and Mark Fortier

“The authors of this luminous reflection on a clan of Northern truckers give it a philosophical—even metaphysical—dimension, as the protagonists seek to reach beyond the human condition. This is a study of truckers of all stripes—tragic, meditative, ambitious and vulnerable. The tone is humorous, charming, sharp—well, death is never far behind. A work of non-fiction you will devour like the trucks eat up the miles.”

“The road is where truckers live and die; everywhere else, their conditions and power no longer make any sense—they feel uncomfortable and clumsy. For a trucker, it is self-evident that a road is always more than just a road. It is not a neutral or incidental environment used solely to reach a goal—it is an environment that is both abstract and concrete and against which he recognizes himself and his people. It is a whole world—his world. A professional trucker feels the fatigue of the road. He knows the loneliness of the beaten path, the melancholy of a roadway winding through the vacant lots of dead industrial cities, just as he infers the anxiety of a wild road disappearing into the horizon. A trucker is nothing outside that world, where he drives his routes and follows his destiny. From this raw, indisputable fact, a truth emerges that is often talked about among truckers: not all roads were created equal.”

From November 1975 to October 1976, Serge Bouchard travelled with truckers in northwestern Quebec. He wanted to study the way they work for his doctoral thesis. Serge Bouchard and Mark Fortier have transformed the material from this unique ethnographic research into a vivid and insightful portrait of the truckers’ world.

Inevitably, this book is about roads and their vagaries, but also about the necessary stops along the way, the hassle of sitting still, the infamous truck stops, where the lore of the waitress dominates, marginality, infinity, solitude, accidents, survival and, above all, the pleasure of being a trucker. The trucks we meet have a face—a nose, eyes, a range of expressions associated with their drivers’ states of mind. Each one has a story, its scars, its wear and tear, its tone of voice. A person can speak like a truck, with a deep, quiet voice, in the same way that Innu storytellers know how to speak like a bear. Serge Bouchard’s eye transforms these machines and their drivers into real characters.

This book takes us to Northern roads in the days of the great James Bay construction sites, but it also takes us much further. Through trucks, it speaks, first and foremost, to the mysteries of life and the impulses of freedom.

Serge Bouchard, who passed away in 2021, was an anthropologist who was fascinated with First Nations cultures. A sought-after speaker and broadcaster, he hosted several flagship programs on Radio-Canada radio: De remarquables oubliés, Une épinette noire nommée Diesel, Les chemins de travers and, with Jean-Philippe Pleau, C’est fou... He published more than twenty books, including Le peuple rieur : hommage à mes amis Innus and the two volumes of Les remarquables oubliés, Elles ont fait l’Amérique and Ils ont couru l’Amérique. He received the 2017 Governor General’s Literary Award for his collection, Les yeux tristes de mon camion. He contributed to numerous magazines over the years, including Québec-Science and L’inconvénient, where he was a columnist. A man of his word and a talented writer, Serge Bouchard was, in the opinion of many, one of the most original intellectuals of his generation.

Mark Fortier is a sociologist. For a time, he worked as a journalist, namely at the weekly ici Montréal, where he was the editor, and then he taught at the Université du Québec à Montréal (UQAM) and at Université Laval. He is now an editor at Lux Éditeur. He has published Le triomphe de l’image. Une histoire des pseudo-événements, a translation of historian Daniel Boorstin’s The Image: A Guide to Pseudo-Events in America. He also wrote a non-fiction work entitled Mélancolies identitaires : Une année à lire Mathieu Bock-Côté. Mark Fortier is a columnist for Lettres québécoises magazine, and he lives in Montréal, Quebec.